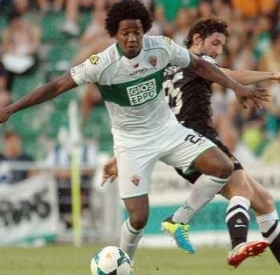 DONE DEAL: Carlos Sanchez leaves Watford for Santa Fe
Championship last season, where he helped secure the club promotion to the Premier League. Prior to joining Watford in the spring, he had
12/09 13:32

Aston Villa are to sign Colombian international midfielder Carlos Sanchez. The player is on the verge of a 4.7 million pounds deal to Villa Park, arriving from Spanish club Elche. The player enjoyed an important role in Colombia's World Cup squad.

Reports from Spain suggest that Everton manager Roberto Martinez is to make Carlos Sanchez his newest acquisition. The 28-year-old defensive midfielder has been with Spanish side Elche since 2013, prior to that he played for French club Valenciennes.