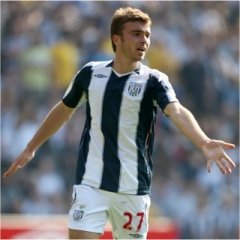 West Bromwich Albion have confirmed that Chris Brunt has triggered a clause in his contract which would see him remain at the Hawthorns until 2018.

West Brom vice captain James Morrison has slammed the transfer policy of his club, and demanded that the owners consider investing money into new players to ensure WBA will develop over the coming seasons.

Here are the latest major transfers completed on the 07 Aug 07.

James Morrison has left Middlesbrough and joined West Brom. The player had been a very important regular for Boro when Steve McClaren was the coach, however Gareth Southgate does not see the player in his plans for this season.