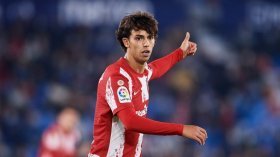 Next week Atletico Madrid take on Premier League side Liverpool hoping to follow up last season's victory over the Anfield giants with another European victory. Diego Simeone’s men have a depleted squad as they prepare to take on the former Premier League champions.

Joao Felix admits plan to move to England in future

Newly signed Atletico Madrid attacker Joao Felix has revealed in an interview that he hopes to one day move to England to play in the Premier League. The former Benfica star, who at 120 million euros becomes one of the most expensive football transfers of all time, has moved to Atletico as a replacement for Antoine Griezmann and arrives with a massive reputation.

Atletico Madrid have reportedly reached an agreement with Tottenham Hotspur to secure the signature of Kieran Trippier this summer.

Atletico Madrid have signed Portuguese youngster Joao Felix for an enormous 120 million euros. The teenager becomes the 5th most expensive player of all time and signs a 7 year contract at the Spanish side.

Chelsea have reportedly told Atletico Madrid that they must make a bid of around £50m in order to secure the permanent signing of Alvaro Morata this summer.

Manchester United due to hold talks with agent of Portuguese star

The representative of Sporting midfielder Bruno Fernandes is reportedly preparing to hold discussions with Manchester United.