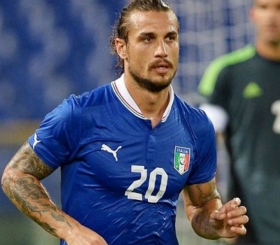 Southampton striker Pablo Osvaldo will join Argentine outfit Boca Juniors on loan for the rest of the season.

Italy international Pablo Osvaldo has revealed that he is hopeful of sealing a move to Boca Juniors having left Inter Milan earlier this week.

Southampton striker Pablo Osvaldo is on the verge of completing a move to Inter Milan. The Italy international striker arrived in his homeland today ahead of a 7.5 million euro switch back to his country.

Southampton are lining up a double swoop for Manchester United's Javier Hernandez and Wilfried Zaha this summer, according to a report.

Pablo Osvaldo is set for a return to Italy after Southampton told the striker that he was free to leave the club.Ambitious Serie A side Parma and Inter Milan are both in the race for the striker's signing.

Atletico Madrid striker David Villa is currently being tracked by Southampton, as they view him to be a potential replacement for Italian international Pablo Osvaldo this summer.

Valencia have reportedly joined the likes of Juventus and Inter Milan in the pursuit for the services of Southampton striker Pablo Osvaldo during the January transfer window.

AS Monaco are understood to be keen on signing Javier Hernandez to fill the void left by Colombian star Radamel Falcao, who has been ruled out for the season with a cruciate knee ligament damage.

Southampton have apparently rebuffed a transfer offer from Inter Milan for Italian international Pablo Osvaldo, as per The Mirror.

Liverpool are reportedly preparing a move for Southampton striker Jay Rodriguez, as a possible replacement for Luis Suarez next summer, according to The Sunday Mirror.

Serie A giants Inter Milan are reportedly readying a January bid for Southampton striker Pablo Osvaldo, according to QS.

Juventus are reportedly hopeful of signing Southampton forward Pablo Osvaldo on loan during the January transfer window, with an option of making the deal permanent next summer.

Southampton's club record signing Pablo Osvaldo has revealed that his former club AS Roma forced him out of the Stadio Olimpico.

The 27-year-old Italian International, who signed for the Saints for a fee of £12.8m during the summer transfer window, insisted that he was happy to have joined the Premier League outfit.

Southampton still could be active in transfer market

Southampton manager Mauricio Pochettino has told reporters that there is still money left in the bank to spend on new players. The Saints have already signed Dejan Lovren, Pablo Osvaldo and Victor Wanyama this summer.

Paulo Di Canio failed to find a win this season in his second attempt as his side played out a draw against Southampton, with a goal apiece to show for it.

Southampton manager Mauricio Pochettino has hinted that he will continue to track the transfer market for new players until the end of the summer transfer window.