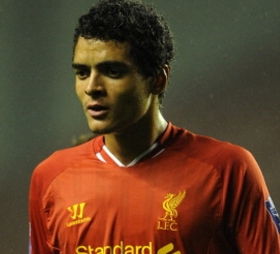 Brendan Rodgers gave away potential answer to Liverpool's problem position for just £500k
on a free transfer before Mamadou Sakho and Tiago Ilori were signed on deadline day for £18m and £7m respectively. Liverpool...
31/08 02:00

Liverpool will sell defender Tiago Ilori for a fee of around 4 million euros. The centre back is wanted by Granada, Olympiakos, Monaco and Freiburg.

Liverpool defender Tiago Ilori has opted to snub a move to Sunderland, The Sun reports.

Real Sociedad are lining up a summer move for out-of-favour Liverpool defender Tiago Ilori, according to a Spanish source.

Liverpool centre back Tiago Ilori to join Bordeaux on loan

Tiago Ilori will spend next season on loan at French Ligue 1 side Bordeaux. The Portuguese defender is considered a bright prospect for the future at Liverpool but requires first team exposure.

Liverpool have sent defender Tiago Ilori on loan to La Liga outfit Granada for the rest of the season.

Granada and Valencia are eyeing a January loan move for Liverpool youngster Tiago Ilori. The 20 year old only joined the Reds in the summer from Sporting Lisbon but has struggled to get game time at his new club.

Valencia are reportedly set to make an offer to sign Liverpool defender Tiago Ilori on loan when the transfer window opens up in January.

Defenders Sakho and Ilori complete their moves to Anfield

Liverpool in talks for Ilori and Sakho

Premier League side Liverpool have confirmed they're in talks to sign center back Mamadou Sakho from Paris St Germaine, and Tiago Ilori from Sporting Lisbon.

The extent of Liverpool's Uruguayan defender has been revealed to be even worse than first thought, as it looks like his knee injury could end his season before it even began.

Sebastian Coates out for 6 months

Liverpool's Uruguayan international defender Sebastian Coates is facing up to 6 months on the sidelines with a torn cruciate ligament picked up playing for Uruguay last week in a friendly against Japan.

Liverpool have reignited their interest in Portuguese defender Tiago Ilori, who they failed with a £3m pound bid for earlier this summer, but are ready to step up their efforts after Ilori refused to sign a contract extenstion with his club, Sporting Lisbon.

Tottenham have been linked with a host of defenders in this transfer window, but Andre Villas-Boas has reportedly decided that Tiago Ilori will be his priority signing in the coming weeks. The Sporting Lisbon defender has attracted much interest in the Premier League.

Amidst speculation of talks with Sporting Lisbon's Tiago Ilori coming to a stand still, Liverpool are looking at another solution elsewhere to strengthen their defence.

Reports suggest that the Anfield side are weighing an offer for Paris Saint-German's centre-back Mamadou Sakho.

The French defender has had less time to play regular first team football compared to his ability with the Ligue 1 champions last season mainly due to Carlo Ancelotti’s rotation policy, starting in just 24 matches out of a possible 38.

It seems unlikely to change even after PSG appointed a new coach in Laurent Blanc.The 23-year-old French International, who can also play as a left-back, has apparently stalled talks with PSG over a contract extension eventhough the club is willing to renew his contract with a monumental increase in his wages.

The French defender has so far made 196 apperances for the Ligue 1 champions and scored 7 goals durig the process.

It will be exciting to see where Mamadou Sakho moves to, as he aims to have a great competitive season to get him into the French world cup squad .

Liverpool have been monitoring the highly-rated Sporting Lisbon defender Thiago Llori since the end of the last season.

Liverpool have finalised their much awaited deal with Spaniard, Iago Aspas. The 25 year old plays for Celta de Vigo as a forward.

Tiago Ilori is being tracked by Liverpool. The highly rated centre back has attracted much interest from across Europe, and Sporting Lisbon have already accepted that the 20-year-old player will be moving elsewhere.