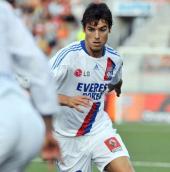 Yoann Gourcuff: Once the Successor, always the Outsider

Arsenal manager Arsene Wenger is ready to recruit Lyon attacking midfielder Yoann Gourcuff on loan until the end of the season.Arsenal are desperate to bring in at least one new face before the transfer deadline closes on the 31st January and have decided that French international Gourcuff is the right man for the role.

Arsenal are reportedly pondering over a move for Lyon midfield star Yoann Gourcuff in case their pursuit of Julian Draxler fails in the current transfer window.

Lyon playmaker Yoann Gourcuff has told reporters that he would be willing to take a paycut to join Premier League side Arsenal. The French international midfielder is the highest earning player at Lyon and president Jean-Michel Aulas has recently hinted that the player could be sold.

Lyon's star midfielder Yoann Gourcuff will not be making a move this summer, despite the interest of Arsenal, Valencia, Atletico Madrid and French rivals Monaco. The midfielder plans to stay for the coming season according to the French club's presidential advisor.

The Gunners manager Arsene Wenger has reverted to his old style as he is once again looking out in his homeland for young blood to recruit for his burgeoning team.

Yoann Gourcuff has put the Gunners on red alert after admitting that he could look for a fresh challenge elsewhere. The Lyon attacking midfielder has long been linked with a move to the Premier League.

Arsenal look set to miss out on the coveted signature of creative midfielder Yoann Gourcuff. The highly rated Lyon player has been linked with a sensational 15m GBP move to the Emirates, but Lyon chairman Jean-Michel Aulas has scotched talk of a move to London.

Lyon midfielder Yoann Gourcuff will not be making a move to Arsenal anytime soon, as Arsene Wenger has yet to make a bid for the talented playmaker. The agent of Gourcuff revealed that no firm offer has been made by the Gunners.

Arsenal are on red alert as Lyon president Jean-Michael Aulas admitted that his club is in significant debt and will have to sell star players. The Gunners have been tracking Gourcuff for five months and could now make a renewed offer for the playmaker.

French sources claim that Arsene Wenger will dip into the transfer market in January and has identified Yoann Gourcuff and Moussa Sow as his main transfer targets.

Arsenal could make an offer for Yoann Gourcuff in January, after Lyon club president Jean-Michel Aulas admitted that financial constraints could force the club into a sale.

Arsenal manager Arsene Wenger has revealed that Yoann Gourcuff's supposed move to Arsenal would have come to fruition had it not been for the surgery the French international had on his knee.

Lyon midfielder Yoann Gourcuff admits that he is delighted to hear of interest in his services from Arsene Wenger's Arsenal.

Arsenal have reportedly made a £22m offer for France international Yoann Gourcuff. Arsene Wenger has been a fan of the attacking midfielder for some time and has reportedly had a bid accepted.

Lyon president Jean-Michel Aulas has ruled out a move for Yoann Gourcuff, the talented playmaker currently at French rivals Bordeaux, insisting that the player is too expensive.

Jean-Louis Tiraud has announced that there have not been any offers for midfielder Yoann Gourcuff this summer, despite reports that Arsenal are looking to bring in the France international.

Yoann Gourcuff has admitted that he would love to make a dream move to Barcelona. The former AC Milan starlet is currently plying his trade for French champions Bordeaux, but several of Europe's biggest clubs have expressed an interest in the French international.

Bayern Munich are apparently ready to make a January transfer window move for French star Yoann Gourcuff from AC Milan. The Frenchman is currently on loan at Bordeaux.

French midfielder Yoann Gourcuff has admitted he is likely to make a move to Bordeaux permanently as he is not keen on returning to Italian giants AC Milan at the end of his loan spell.