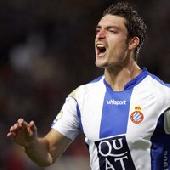 Albert Riera returns to Manchester City to seek coaching advice from Pep Guardiola and Mikel Arteta as Sergio Aguero and Co are all smiles ahead of FA Cup final against Watford
Wembley against Watford on Saturday to prepare for.  Having clinched the Premier League title on the final day, ensuring they edged out
17/05 00:30

Albert Riera has made a move from Olympiakos to Galatasaray worth approximately $3.9m. The player left Liverpool last summer.

Liverpool duo out with injury

Liverpool duo Yossi Benayoun and Albert Riera have been ruled out of action for a month. The double blow will hurt Rafa Benitez's plans for a turnaround in poor form after he confirmed both would be sidelined for the extended period.

Liverpool will welcome Man Utd to Anfield, after a week of back chat from Rafa Benitez and Alex Ferguson in the media. Benitez will give Albert Riera his debut, whilst Dimitar Berbatov is likely to play some part.

Liverpool winger Albert Riera is looking forward to helping the Reds battle to victory over rivals Manchester United at the weekend. Riera was part of the Manchester City side that defeated United two years ago.

Liverpool boss Rafa Benitez praised Albert Riera, indicating that he believes he is a bright player for the future for the Reds. Riera joined on transfer deadline for £8 million from Espanyol.

Riera wants to leave this summer

Albert Riera has decided that he wants to leave Espanyol this summer, and has insisted that his destination could well be the Premiership. Liverpool and Tottenham have been linked with the winger.

According to reports emanting from a section of the British and Spanish press, Liverpool manager Rafael Benitez is rapidly moving towards signing the midfield duo Albert Riera and Marek Hamsik.

Albert Riera could be heading to Liverpool as Rafa Benitez is reportedly keen to land the talented Spanish international winger. It is believed that the Espanyol man is valued at around £8 million by his club.

Albert Riera, the Espanyol winger who formerly played for Man City, has revealed he was very angry at being on the bench for the 0-0 draw with Barcelona. Riera has now been linked again with a summer move to Madrid; this time not just to Real but to Atletico Madrid too.

Espanyol striker Raul Tamudo has called on his club to not allow any of their star players to leave. Carlos Kameni, Dani Jarque, Albert Riera and Luis García have all been linked with a move away in the summer.

Riera: no Prem move yet

Espanyol midfielder Albert Riera has dismissed 'speculation' linking the winger with a move back to the Premiership. Both Tottenham and Man Utd were reportedly interested in signing the Spaniard.

Carling Cup winners Tottenham Hotspur are considering a move for Espanyol winger Albert Riera. The player has already enjoyed a spell in the Premiership with Man City, but an outstanding season in La Liga has seen several admiring glances.

Espanyol have swiftly move to reject rumours that their two stars Daniel Jarque and Albert Riera will shortly be leaving the club. Riera is wanted by Real Madrid and Man City, whilst Juande Ramos continues to chase Daniel Jarque for Tottenham.

Espanyol winger Albert Riera is remaining coy on rumours that he could be making a move to Tottenham in January. Real Madrid had reportedly made a formal offer for Riera which Espanyol rejected, but Ramos is known to be a huge fan of the ex-Man City man.

Impressive winger Albert Riera is wanted by Real Madrid after some sterling displays for Espanyol this season. The player has a release fee of £15m, but Real could offer £10m to tempt the player to the capital.

Valencia miss out on top spot

Valencia missed an opportunity to go top of La Liga tonight as they were given a home defeat against Espanyol, Los Che's second 2-1 loss in four days at the Mestalla.