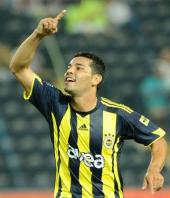 Robin van Persie admits he was to blame for controversial shirt swap with Andre Santos during Man Utd vs Arsenal
of the gesture. Santos’s Arsenal career faltered badly after that incident – he failed to start another Premier League...
12/06 12:02

Why would Arsenal be a Manchester United without this German?

Arsenal were top of the Premier League table after about twenty match days and it’s no mean feat considering the might of the dressing room and of other title contenders such as Manchester City. Even mid-table clubs and the likes of Manchester United and Tottenham Hotspur. After a scintillating start to their campaign, not to mention some floundering at the Etihad Stadium, Arsenal have gone to the dogs since even a Roberto Martinez managed side managed to leapfrog Arsenal at some point of the season.

Brazilian defender Andre Santos has agreed a transfer to Brazilian side Flamengo, signing a two year contract. The defender has reportedly been released by Arsenal and was free to sign a deal with any club as a free agent.

Flamengo in talks with Arsenal over Andre Santos

Campeonato Brasileiro Série A side Flamengo have already resumed talks with Arsenal's left-back André Santos on a move, according to reports in the Brazil.

Globo Esporte reports that negotiations over the move are at an advanced stage and André Santos is assumed to be set to sign a one-year loan deal with the Rio de Janeiro-based club.

The Brazilian defender is under contract with the Gunners until 2015, but Globo Esporte suggests that the North London have already given the green light to Flamengo to go through with the move.

Will it be another quiet summer for Arsenal?

It's been eight years since Arsenal last won a trophy and year after year the best players keep leaving - now the fans have started demanding success. Will Arsene Wenger finally spend the money we know the club has, or will it be yet another quiet summer for the Gunners?

Arsenal have agreed a deal that will see Brazilian full back Andre Santos swap the Emirates for a move back to his home country on loan until the end of the season. Gremio will pay his salary for the next 12 months.

Arsenal have been linked with a move for African starlet Acharaf Laazar, a player dubbed "the new Gareth Bale". Club manager Arsene Wenger has been somewhat unhappy with the consistency of his current left backs, Kieron Gibbs and Andre Santos, this season.

Versatile Sunderland player Kieran Richardson has been linked with a surprise move to Arsenal. The former Manchester United player is comfortable playing both on the left of midfield or defence; and Arsene Wenger is reportedly considering a move for Richardson as he faces a full back injury crisis.

Arsenal manager Arsene Wenger admitted yesterday that fresh injury worries for makeshift left back Thomas Vermaelen would mean that the Gunners are to investigate a defensive loan signing, and Nigerian left back Taye Taiwo is the latest name linked with a move to the Emirates.

Arsenal manager Arsene Wenger today admitted that he may look to sign a backup full back on loan during January. Andre Santos, Jenkinson, Sagna and Gibbs - all of Wenger's four full backs - are injured.

Arsenal to swoop for Belgian defender

This weekend marks the 125th anniversary of Arsenal Football Club, as the Gunners host Everton in today's Premier League battle at the Emirates. The Gunners are in inspired form, winning 6 of their last 7 games; whilst Everton remain hopeful of continuing their push from the mid-table.

Arsenal to call upon Martin Angha?

Arsenal's defensive injury crisis means that young Swiss defender Martin Angha could be selected to face Everton in the Premier League this weekend.

Arsenal manager Arsene Wenger admitted that Brazilian left back Andre Santos will be missing from action for a couple of weeks, after sustaining an ankle injury against Olympiakos in the Champions League last night.

Walcott: Confidence is back

Arsenal winger Theo Walcott has spoken highly about the team's character following Arsenal's 5-3 win against Chelsea and believes that this victory will propel them forward.

Arsenal got their faltering season back on track with an excellent offensive display at the Stamford Bridge. Captain Robin van Persie continued his great form with a well taken hat-trick to take Arsenal up to 7th in the table.

This weekend's biggest fixture pits London rivals Chelsea against Arsenal for Saturday's early kick off. Chelsea will start as favorites, but a rejuvenated Gunners side are sure to offer tricky competition for the Blues. A Chelsea victory would see them leapfrog Man Utd into 2nd place.

Slowly but surely, Arsenal resuscitate their season. Wins over Marseille and Sunderland last week have resonated former success within the Gunners' camp; but the visit of old rival Tony Pulis' Stoke City normally provides an unrivaled challenge for Wenger's men.

Ramsey strike wins it at the end

Robin van Persie scored twice to guide Arsenal to a 2-1 victory over Sunderland. But it wasn't all fun and games for the Gunners, as van Persie left it late from a sublime free kick to score the winner. Former Gunner Seb Larsson had leveled the scores just before half time.