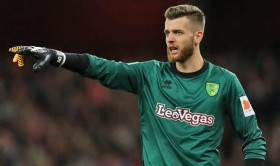 Scottish giants Celtic and Premier League strugglers Stoke City are on the list of teams interested in Man City goalkeeper Angus Gunn. The highly rated shot stopper is reportedly on a list of players that will be allowed to leave the Cityzens this summer.