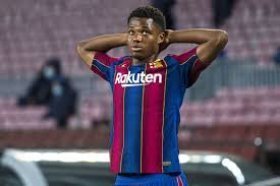 Barcelona sensation Gavi has no plans of leaving the club for Chelsea next summer, Spanish publication Sport claims.

Manchester United to miss out on Barcelona star

Manchester United are unlikely to get their hands on Ousmane Dembele in January following the recent injury setback for Ansu Fati.

Ansu Fati suffers tear in meniscus, in the left knee

The Spanish international who featured in Barca's victory against La Liga side Real Betis, was substituted at half time when he went down injured.

Finishing second in La Liga and still being in the Champions League might be a good result for some football clubs. But Barcelona isn’t just any football club. It’s been a deeply inconsistent season at Camp Nou so far. Not only has Barcelona suffered a managerial change, but new players like Antoine Griezmann have failed to settle in a troubled squad.

Barcelona have reportedly ended their long-term pursuit of Chelsea winger Willian in order to focus on re-signing Neymar from the ranks of Paris Saint-Germain.

According to Daily Mail, Barcelona have identified Getafe striker Angel Rodriguez as the make-shift replacement for injured Ousmane Dembele.