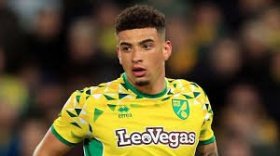 Tottenham defender on the radar of AC Milan

Tottenham are reportedly eyeing a summer move for Norwich City centre-back Ben Godfrey, according to The Sun.