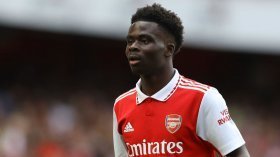 Arsenal have been handed an injury boost with Bukayo Saka expected to be fit for the north London derby tomorrow.

Arsenal, having been given permission to discuss personal terms with Mykhaylo Mudryk, have agreed a five year contract with the Ukraine international. The impressive young forward has been linked with a transfer to the Emirates Stadium since last summer, and now it is up to the Gunners to agree a fee for the player with Shakhtar.

Arsenal star duo Gabriel Martinelli and Bukayo Saka are set to return to first-team training ahead of the Premier League restart.

Arsenal star Bukayo Saka is set to sign a new long-term contract with the club, according to The Telegraph.