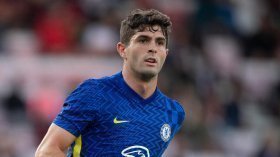 Christian Pulisic handed transfer reprieve as Chelsea forced into £88m Mykhailo Mudryk rethink
... was reportedly lined up for a move away from Chelsea this January before an unexpected development put a stop to Chelsea's transfer plans ...
26/01 13:30

Chelsea forward Kai Havertz could leave the club at the end of the season, according to Florian Plettenberg.

Chelsea are reportedly open to parting ways with Raheem Sterling at the end of the campaign.

Chelsea manager Graham Potter has clarified that Christian Pulisic was not expected to leave the club before his knee injury.

Chelsea manager Graham Potter has confirmed that Christian Pulisic and Raheem Sterling could be sidelined for several weeks.

Chelsea have reached a verbal agreement with Atletico Madrid to sign Joao Felix on loan, The Athletic report.

Chelsea have suffered a double injury blow with Raheem Sterling and Christian Pulisic being sidelined.