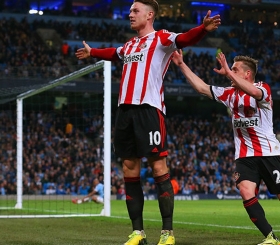 How former Sheffield Wednesday loanee Connor Wickham has fared since returning to Crystal Palace
finished in the bottom half of the table. After heading back to Crystal Palace following the expiry of his loan deal, Wickham posted on his
17/01 06:00

Premier League newcomers Norwich City have made a formal offer for Crystal Palace striker Glenn Murray, according to reports.

Crystal Palace boss Alan Pardew has admitted that the club would be open to the sale of striker Dwight Gayle so long as the player's valuation is met.

Crystal Palace have announced the arrival of striker Connor Wickham from Sunderland on a five-year deal.

Sunderland are reported to have on a summer fee for the sale of striker Connor Wickham to Crystal Palace.

Former England international Jermain Defoe will wrap up a deal to join Sunderland. The ex-Tottenham striker will put pen to paper on a three year contract at the Black Cats.

Tottenham are readying a bid for Sunderland striker Connor Wickham. Spurs are to table their initial bid for the talented striker whose contract will expire in June next year.

Striker Connor Wickham could be heading out of Sunderland on a free transfer. The forward's contract expires in July.

Sunderland are understood to be keen on extending the stay of striker Connor Wickham at the club, according to Goal.com

Sunderland are worried that striker Connor Wickham could be heading for the Stadium of Light's exit door. West Ham have made a fresh bid for the striker, tabling an offer of 6.75 million pounds for the former Ipswich Town man.

Sunderland manager Gus Poyet wants Connor Wickham to confirm his long term commitment to the Black Cats and sign a new contract with the club. Wickham enjoyed a rich vein of form at the end of last season.

Newly promototed Premier League side Leicester City are believed to be interested in signing Sunderland striker Connor Wickham during the summer transfer window.

Sunderland have allowed young striker Connor Wickham to move on loan to Leeds United until the end of the season. The 20-year-old had been linked with a host of other teams but has opted for a short term deal to move to Elland Road.

Conor Wickham set to be loaned out by Sunderland

Connor Wickham is set to follow fellow team-mate David Vaughan out of the Stadium of Light on loan, as manager Gus Poyet looks to provide his fringe players with regular first-team football.

Paolo Di Canio's busy summer could cost Sunderland in the long run, will they hold on to their Premier League status?

A report on Wednesday morning suggested that Sunderland and Tottenham are in discussions regarding a season long loan swap deal between Connor Wickham and Steven Pienaar.

Sunderland came twice from behind to pick up a valuable point against a spirited Aston Villa side, although it would not have been the result they expected.