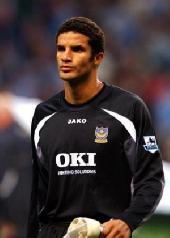 Tottenham back in for David James

Tottenham are reportedly interested in Portsmouth goalkeeper David James again. According to reports, Spurs have offered £1.5 million to bring the former England international to the club.

As David James' well publicized move from Stoke City to Portsmouth collapsed over wages, Pompey frontman Peter Storrie has hit out at their Premiership rivals.

Stoke City boss Tony Pulis has moved a step closer to landing David James, according to reports. It is believed that Portsmouth will let the goalkeeper leave for around £1 million.

David James has revealed that he would love to see Mexico boss Sven-Goran Eriksson at Portsmouth in the wake of the departure of Tony Adams last week.

The England number one will set a new Premier League appearance record on Saturday when Portsmouth play Manchester City. The 38-year old has played 535 games in top flight football so far.

Portsmouth midfielder Niko Kranjcar has called on the club to show its ambition again and make a move for more big names. Pompey are apparently set to have a quiet January transfer window.

Tottenham still up for James

Portsmouth goalkeeper David James has revealed he will not be following Harry Redknapp to Tottenham, and is happy to stay at Fratton Park for the forseeable future.

Zenit goalkeeper Vyacheslav Malafeev wants a move to the Premiership, and it is understood that Pompey have the goalkeeper on their shortlist, as well as Tottenham boss Harry Redknapp.

Steven Gerrard's 75th minute penalty was enough for Liverpool to pick up another victory and to ride the Premiership wave as they defeated Portsmouth 1-0 at Anfield on Wednesday.

Blackburn boss Paul Ince has reserved the ultimate praise for goalkeeper Paul Robinson, after insisting that the Rovers have the best goalkeeper in the Premiership.

Man City have one of the most gifted players in the world, Robinho - a true match winner who can turn the luck in their favour. The key problem of the Citizens is the lack of understanding between the players, the game against Portsmouth will see if they can play as a team.

Blackburn Rovers goalkeeper Paul Robinson has revealed he has his eyes firmly set on the number 1 jersey for England. Portsmouth goalkeeper David James is currently the first choice.

Blackburn boss Paul Ince has backed under fire goalkeeper Paul Robinson to be a success at his new club. Robinson has been brought in from Tottenham to replace Brad Friedel, who joined Aston Villa last week.

David James is hoping it is a case of third time lucky for him today, as he prepares for the FA Cup Final with Portsmouth against Cardiff City this afternoon. James has called on his team mates to deliver a good performance.

Harry Redknapp has received buckets of praise from his Portsmouth chairman Sacha Gaydamak, who labelled the coach as 'a footballing genius'. Portsmouth are looking forward to the FA Cup Final with Cardiff City and hope to lift the trophy to guarantee European qualification.