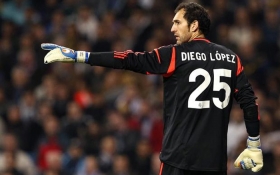 Conte will sell Thibaut Courtois to Real Madrid on one condition

Chelsea boss Antonio Conte is prepared to sell Thibaut Courtois to Real Madrid, provided he can get hold of Alvaro Morata in exchange.

Premier League leaders Chelsea have identified Diego Lopez as a potential replacement for Thibaut Courtois at the end of the season.

Gianluigi Donnarumma this season has broken into AC Milan's first team as their goalkeeper of choice and there are rumours that the talented 17-year-old could be headed to Euro 2016 this summer.

Chelsea will reportedly launch a bid for AC Milan youngster Gianluigi Donnarumma, should Thibaut Courtois leave the club this summer.

Liverpool have reportedly been linked with a surprise move for AC Milan goalkeeper Diego Lopez.

Real Madrid shot-stopper Diego Lopez has reportedly agreed to join AC Milan on a four-year deal, according to a report.

Lopez to move to AC MIlan?

Real Madrid goalkeeper Diego Lopez has reportedly rejected his much speculative move to French club Monaco, and is now being heavily linked with Italian giants AC Milan, who are keen on signing the Spaniard.

Real Madrid goalkeeper Diego Lopez looks set to join Monaco after his club signed Keylor Navas yesterday. Lopez has been linked with a move away from the Bernabeu for several months.

Real Madrid to sign Man Utd star in the summer?

Real Madrid are planning a summer swoop for Manchester United's Spanish shot-stopper David de Gea, according to a report.

Premier League target Iker Casillas has insisted that he is happy to ply his trade at Real Madrid until the age of 40.

Arsenal in talks with Iker Casillas?

Arsenal are reportedly in preliminary talks with Real Madrid's legendary goalkeeper Iker Casillas over a summer transfer, according to Spanish newspaper AS.

Arsenal and Manchester City are set to battle it out for the signature of Real Madrid shot-stopper Iker Casillas in the winter transfer window.

Iker Casillas set to join Arsenal in the summer?

Real Madrid Legendary goalkeeper Iker Casillas will reportedly consider a summer move to Arsenal, if he fails to cement his place in the starting line-up at the Bernabeu by the end of the current campaign, according to Spanish newspaper El Confidencial.

Premier League giants Manchester City have once again been associated with a move for Real Madrid shot stopper Iker Casillas, according to The Mirror.

La Liga giants Real Madrid are reportedly keen on acquiring the signature of Chelsea's number one Petr Cech during the upcoming transfer window, as per CaughtOffside.

Real Madrid manager Carlo Ancelotti is hopeful that he can keep Arsenal target Iker Casillas at the Bernabeu beyond the current season.

Real Madrid and Spain goalkeeper Iker Casillas is set to make his first competitive start for the club since January when the Galacticos take on Galatasaray in the Champions League on Wednesday night.

Belgium international Thibaut Courtois has admitted that he is not afraid of challening Petr Cech for the first team at Chelsea when he returns next season.