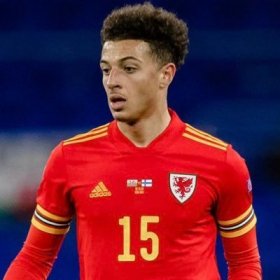 Chelsea defender Ethan Ampadu’s 11-word verdict after making Venezia debut following loan move
to bide his time with his new employers after his move away from Stamford Bridge but was finally handed his first outing for the club at the
28/09 21:00

Sevilla are unlikely to sanction the sale of Jules Kounde to Chelsea unless his €80m release clause is triggered.

Ethan Ampadu heading out on loan?

Ethan Ampadu could be heading for another temporary stint away from Chelsea, according to ESPN.

Sheffield United have confirmed the signing of Ethan Ampadu on a season-long loan from Chelsea.

Chelsea and Wales defender Ethan Ampadu is near completing a loan move to fellow Premier League side Sheffield United for the upcoming campaign.

Chelsea have reportedly planned to loan out Fikayo Tomori for the 2019/2020 season despite him being a regular during the pre-season matches.

RB Leipzig have completed a transfer for Chelsea defender Ethan Ampadu on a season long loan deal. The highly rated English under-21 international is seen as an important member of the Blues' squad for the next few seasons and has been informed that he will return to Stamford Bridge as first-team squad player after his spell in Germany.

Chelsea boss Maurizio Sarri has revealed that the club are short in the central defensive department with both Antonio Rudiger and Gary Cahill on the sidelines.

Chelsea will be aiming for their first away victory of 2019 when they make the trip to Sweden to face Malmo in the first leg of the Europa League round of 32.

Chelsea manager Maurizio Sarri has admitted that he is pleased with the character and reaction from his side during the 2-2 Europa League draw against Vidi on the road.

Chelsea face Hungarian side Vidi on the road in their final Europa League group stage game on Thursday night.

Chelsea have rewarded teenage midfielder Ethan Ampadu with a new five-year contract following his impressive development since linking up with the club.

Cardiff City manager Neil Warnock has spoken about the prospect of taking Chelsea midfielder Ethan Ampadu on loan during the second half of the ongoing campaign.

Chelsea manager Antonio Conte has revealed that Antonio Rudiger's omission from the matchday squad against Southampton was a 'tactical decision'.

Chelsea manager Antonio Conte has provided an injury update on his players ahead of tomorrow's Premier League fixture against Southampton.

Chelsea head coach Antonio Conte has confirmed that the club will be without the services of young midfielder Ethan Ampadu through injury for the rest of the season.

Chelsea will seek to maintain their quest for silverware when they host Hull City in the FA Cup fifth round tonight. The Blues have a key Champions League tie versus Barcelona next week, and Antonio Conte is likely to ring in the changes.

Chelsea manager Antonio Conte has confirmed that the Blues won't be able to bank on the services of three first-team players ahead of tomorrow's FA Cup fifth round tie versus Hull City.

Chelsea will look to secure their first league victory of 2018 when they take on Brighton & Hove Albion at the Falmer Stadium. The Blues will be without the services of Pedro and Alvaro Morata through suspension, but Antonio Conte will still expect to name a strong outfit to maintain the club's top-four hunt.

Chelsea will look to progress to further in the FA Cup when they host Norwich City in the third round replay on Wednesday night. The Blues have attained three successive goalless draws for the first time in their history, and Antonio Conte will want to end this streak, though he may need to rotate the squad.