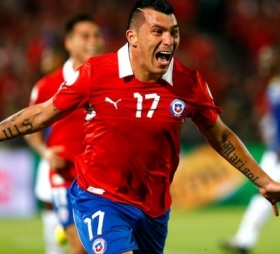 Leeds target £25m winger, Gary Medel move off, Argentine star rejects transfer
side of a Demarai Gray goal. Leeds have been rather quiet in the transfer window this summer, securing Jack Harrison on a permanent deal,
26/08 19:15

Chilean midfielder Gary Medel believes Alexis Sanchez would be a great addition to the Inter Milan squad this summer.

AC Milan could look to sign French midfielder Geoffrey Kondogbia from rivals Inter Milan, with Liverpool also interested, according to reports in Italy.

Inter Milan will listen to offers for Colombian defender Jeison Murillo this summer. Arsenal and Chelsea have been previously credited interest for the player.

Chile international Gary Medel is considering his future at Inter Milan with manager Roberto Mancini keen on reshuffling the squad over the summer.

Chilean international Gary Medel has hinted that he could be open to a return to the Premier League this summer.

Inter Milan and Cardiff City have agreed a 10 million euro fee for Chile defensive midfielder Gary Medel. The two clubs have been locked in talks for over a month regarding a move for the versatile defensive star.

Cardiff midfielder Medel won't be sold to Inter for cheap

Cardiff City will not let midfielder Gary Medel join Inter Milan on the cheap, just because the player wants to leave in search of top flight football. City's chairman Mehmet Dalman insists that Medel is worth at least 12 million euros.

Chile midfielder Gary Medel is to join Inter Milan on a season long loan from Cardiff City. The player will leave the Welsh club in pursuit of top flight first team football.