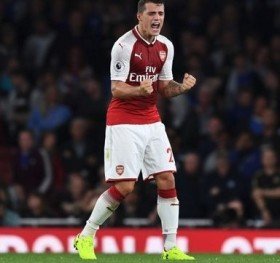 Arsenal move for Thomas Partey will benefit Granit Xhaka but also lead to two departures
transfer fee. Torreira has been sporadically linked with a return to Italy or a possible move to Spanish football, and that ...
03/07 18:12

Arsenal receive fitness boost with midfielder back in regular training

Arsenal have received a fitness boost ahead of their forthcoming Premier League clash against Norwich City at the Emirates Stadium.

Arsenal have missed out on the signing of Orkun Kokcu from Feyenoord after the midfielder put pen-to-paper on a new contract with the Eredivisie outfit.

Arsenal have agreed to extend the loan contract of Daniel Ceballos until the end of the campaign, a report from Marca claims.

Arsenal manager Mikel Arteta has said that Bernd Leno may have suffered a serious knee injury during the club's 2-1 Premier League defeat to Brighton & Hove Albion on Saturday.

Arsenal manager Mikel Arteta has revealed that the club will assess the injuries sustained by Granit Xhaka and Pablo Mari during the recent Premier League clash against Manchester City.

Arsenal boss Mikel Arteta is keen on signing a new defensive midfielder during the summer with Lucas Torreira fancied to head through the exit door.

Arsenal are reportedly in contact with Real Betis regarding a summer move for Nabil Fekir.

Arsenal legend Paul Merson has urged the club to look into a move for West Ham United midfielder Declan Rice, who has recently been linked with Chelsea.

Arsenal are reportedly confident of extending the loan contract of midfielder Daniel Ceballos amid the current shutdown due to the COVID-19 virus.

The arrival of Mikel Arteta at Arsenal has seen the Gunners reverse their dismal fortunes of early in the 2019/20 season. Yet we still wonder whether or not Arteta has discovered who his best starting XI is.

Arsenal host Olympiacos in the second leg of the Europa League round of 32 clash tonight.

Arsenal are scheduled to host Everton in the Premier League this evening.

Arsenal will make the trip to Athens to face Olympiacos in the first leg of their Europa League round of 32 tie.

Arsenal face Chelsea at Stamford Bridge in tonight's Premier League encounter. The Gunners are currently 10 points behind fourth-placed Chelsea in the standings and they have a good chance of closing the gap to enhance their Champions League prospects.

Arsenal manager Mikel Arteta has admitted that he has concerns over the fitness of Lucas Torreira and Sead Kolasinac ahead of Saturday's Premier League meeting against Sheffield United at the Emirates Stadium.

Gabonese striker Pierre-Emerick Aubameyang has opened up for the first time on rumours that he will be departing North London in the January transfer window for a new challenge. It is understood that Real Madrid and Sevilla are in the race to sign the talented striker, and that the forward himself is ready to depart the Emirates Stadium for a move to Spain.