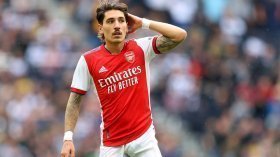 Barcelona fullback Hector Bellerin fields Everton approach
... to the Premier League is totally ruled out. The player has closed his stage in England, where he was an important player at Arsenal for ...
21/01 10:02

Chelsea are reportedly keeping tabs on Bayern Munich defender Benjamin Pavard, who has his sights on a fresh challenge.

Chelsea defender Cesar Azpilicueta has emerged as a potential target for Real Madrid next summer.

Spanish defender Hector Bellerin will depart Arsenal today, signing for his former club Barcelona on a free transfer. The Gunners have agreed to let the long serving full-back rejoin his boyhood club, and a clause has been inserted into the deal meaning that 50 percent of the player's next transfer fee will be guaranteed to Arsenal.

Barcelona have joined Real Betis in the hunt to sign Arsenal defender Hector Bellerin on a free transfer this summer.

Bellerin deal to Betis falls through

Arsenal defender Hector Bellerin will not be returning to Real Betis for the coming season, after Betis manager Manuel Pellegrini confirmed to the media that the club's business for the summer has been completed. Betis have been busy in the transfer market so far, but have been unable to persuade Arsenal to release Bellerin on a free transfer.

Spanish defender Hector Bellerin could be set for a surprise stay with Arsenal, after being pictured training with the North London side. Bellerin, who spent last season on loan at Real Betis and won the Copa Del Rey with his temporary club, is open to staying with the Premier League giants despite having just one year remaining on his current deal.