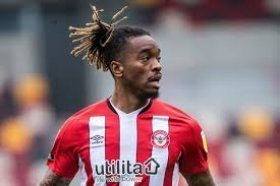 Arsenal: Lee Gunner claims he’d rather have Ivan Toney over Dusan Vlahovic
? They don’t.” TIF Thoughts on Ivan Toney and Arsenal… It certainly looks as though Arsenal are extremely keen to find themselves a new
12/01 20:35

Arsenal have suffered an untimely blow with Alexandre Lacazette and Pierre-Emerick Aubameyang sidelined for the Premier League opener.

Everton and Leicester City are among the clubs interested in signing Brentford striker Ivan Toney during the next transfer window.

Brentford FC came within 90 minutes of a Premier League 2020/21 season. That was three times.

Arsenal and West Ham United may need to pay around £30m to sign Ivan Toney during the next transfer window.

West Ham United will make an approach to sign Ivan Toney from Brentford during the summer transfer window.

La Liga leaders Atletico Madrid could make an approach to sign Alexandre Lacazette from Arsenal in the summer.

Arsenal are reportedly monitoring the progress of Brentford striker Ivan Toney with a view to a future approach.

Everton are reportedly mulling over a potential move for Brentford striker Ivan Toney.