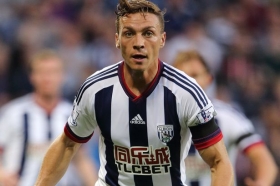 Former Chelsea midfielder John Obi Mikel has made his return to English football with Stoke City on a one-year contract.

Aston Villa are to offer a new deal to former England captain John Terry as the defender heads into the final five months of his existing contract with the Villa Park club. Terry has impressed since making the move to Steve Bruce's side, with the Villains currently riding high in the Championship in 3rd place.

Swansea City will reportedly make a summer approach for West Bromwich Albion defender James Chester. The Wales international joined the Baggies from Hull City last summer with a view to earning a regular role in the first-team.

Aston Villa look set to announce the arrival of defender Joleon Lescott after they agreed a &pound1m fee with West Bromwich Albion for his transfer.

Southampton are lining up a summer bid for Hull City defender James Chester, The Mirror reports.