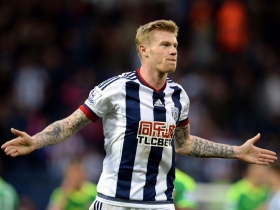 Republic of Ireland international James McClean has signed a new two and a half year deal with West Brom to remain at the side until at least 2019. Albion have confirmed that the 27 year old has agreed an improved contract and have also confirmed that there is an option for another year should McClean decide to stay at the club.

West Bromwich Albion are poised to announce the signing of Wigan Athletic midfielder James McClean in the next 24 hours.

West Bromwich Albion are believed to have agreed a transfer fee with Wigan Athletic to sign James McClean, according to a report.

Sunderland have seen their latest loan bid for summer target Charis Mavrias rejected by Greek side Panathinaikos.The Black Cats had earlier agreed a £2.5m deal for the winger, but eventually had to withdrew their offer after growing frustrated due to a series of delays in finishing up the deal.

Recently relegated Premier outfit Wigan Athletic have completed the signing of James McClean from Sunderland for an undisclosed fee, according to Sky Sports. The Republic of Ireland International joined the Black Cats under Steve Bruce during the 2011 summer transfer window but he did not get enough game time until the arrival of Martin O'Neill at the Stadium of Light.

However, the former Derry City star fell out of favour with new manager Paolo Di Canio and with the addition of an influx of players at the Wearside, Mclean has been allowed to make the switch to the Latics.

McClean who became manager Owen Coyle's tenth signing of the summer transfer window, said: "I'm delighted to be signing, it's happened very quickly but as soon as I found out the gaffer was interested I wanted to come.

"You can see this is a club moving in the right direction again and I can't wait to be a part of that.

"I know James McCarthy very well and he's said only good things about the place so I'm really looking forward to getting started and meeting everyone."

Neil Lennon is hoping to wrap up a deal to sign Sunderland's winger James McClean this summer. According to reports from Scotland, Celtic are the favourites to secure the Ireland international's signature.

Everton look all set to complete a £4m deal that would land the Republic of Ireland international, Aiden McGeady on their side. It has been reported by The Scotsman that the Spartak Moscow winger could well be the first signing of Roberto Martinez’s Goodison Park reign.

Sunderland winger James McClean has signed a new contract with the Black Cats that will keep the Republic of Ireland attacker at the Stadium of Light until 2015.