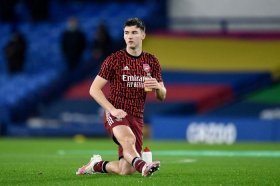 Ex-Celtic defender Kieran Tierney's Arsenal training absence detailed
... staff as part of the first team. Toure would follow Rodgers to the Premier League in 2019. The Ivorian admits it was a tough call to leave ...
29/11 16:18

Arsenal could be without key defender for Chelsea game

Arsenal could be without Takehiro Tomiyasu when they face Chelsea in Sunday's Premier League clash.

Arsenal have the opportunity to reclaim the top spot in the Premier League when they host Nottingham Forest this afternoon.

Arsenal manager Mikel Arteta has confirmed that Oleksandr Zinchenko has picked up a fresh muscle injury in training.

Arsenal will entertain Liverpool in today's Premier League clash at the Emirates Stadium.

Arsenal have been handed a triple fitness boost ahead of the Premier League clash against Tottenham Hotspur tomorrow.

Arsenal have the opportunity to reclaim their top spot in the Premier League when they face Brentford this afternoon.

Arsenal will be missing the services of Oleksandr Zinchenko when they face Brentford on Sunday afternoon.

Nuno Tavares has admitted that he wanted to join Marseille on a permanent basis from Arsenal this summer.