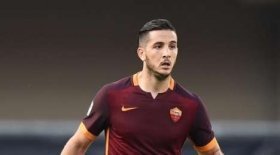 Chris Smalling to return to United next summer

Chris Smalling is expected to return to Manchester United next summer. The AS Roma player will approach the end of his loan.

Italian giants Roma are ready to move for Tottenham's wantaway defender Toby Alderweireld this summer, in a transfer deal that could recoup up to £25 million for Spurs for the Belgian international centre-back. Alderweireld has so far refused to sign a contract extension at White Hart Lane, apparently as his agent negotiates a move away from the club for his client.

Napoli have reached an agreement with Roma to sign Kostas Manolas for a fee of 36 million euros. The Greek international centre-back, coveted by Arsenal, has signed a four-year contract with the Naples side.

Arsenal prepared to trigger release clause of Serie A star?

Arsenal are reportedly willing to trigger the £31m release clause of Roma's Kostas Manolas as they aim to bolster the central defensive department.

Manchester United are reportedly considering the prospect of triggering the release clause in the contract of AS Roma defender Kostas Manolas.

Leicester City have reportedly instructed Manchester United to pay up a world-record £90m fee for a defender to pursue Harry Maguire this summer.

Arsenal to battle Manchester United for Serie A defender?

Roma defender Kostas Manolas has reportedly emerged as a target for both Manchester United and Arsenal ahead of this summer's transfer window.

Manchester United could get the chance to sign Roma defender Kostas Manolas on a cut-price deal when the transfer window reopens in three months' time.