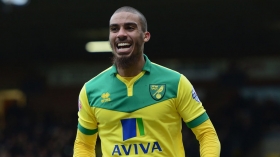 Ryan Yates and Lewis Grabban injury update ahead of Nottingham Forest's clash with Luton Town
bringing you the latest developments on their planning bid, breaking news, transfer features and comment pieces, as well as the key talking
01/03 17:00

Recap: Championship round one

The SkyBet Championship took centre stage this weekend as all twenty-four teams got their 2017/18 seasons underway, with ambitions of making it to the promised land of the Premier League. First, each team must overcome forty-six gruelling games in one of the most competitive divisions around, with any team capable of providing a shock result against another.

Bournemouth have completed the signing of former star Lewis Grabban from Norwich City for a reported fee of around £7m.

Crystal Palace are hopeful that Norwich City will come up with an offer for out-of-favour forward Dwight Gayle, should Lewis Grabban head back to Bournemouth.

Norwich City are said to have rejected two bids for striker Lewis Grabban, according to reports.