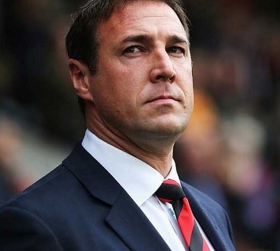 Ross County sign Kazeem Olaigbe on season-long loan from Southampton
manager Malky Mackay told the County website. “His performances in Premier League 2 saw him nominated for the league’s Player of the Season.
27/06 16:56

Former Arsenal and Liverpool winger Jermaine Pennant has joined Championship strugglers Wigan Athletic until the end of the season.

Crystal Palace are moving a step closer to agreeing a transfer for Man Utd winger Wilfried Zaha. The winger is available for transfer.

Malky Mackay to take over at Crystal Palace?

Malky Mackay is the bookies favourite to take over at Crystal Palace as their new manager. Tony Pulis surprised many when he stood down as head coach just two days before the Premier League season begins.

We’re into the final third of 2013/2014 and only one thing is certain – the battle for Premier League survival is approaching boiling point. Everyone down at the bottom thinks it will be their team to face the dreaded drop, as panic buttons across Britain are thumped. We can usually rely on last season’s FA Cup holders for the opposite response to a relegation battle, though this season a new club must be ready to step up to the plate.

Cardiff City have appointed Norwegian manager Ole Gunnar Solskjaer as their new coach. After lengthy talks with the Welsh club's board of directors and owner Vincent Tan, the former Man Utd striker has decided to make a move to the struggling club.

Cardiff City owner Vincent Tan will spend the New Year period attempting to persuade Molde manager Ole Gunnar Solskjaer that the Welsh club is the next best place to continue his development. Tan contacted the Norwegian yesterday regarding the vacant position.

Cardiff City have parted company with Malky Mackay. Vincent Tan has reportedly paid off the duration of his contract.

Cardiff City manager Malky Mackay is planning a surprise January transfer window move for Arsenal youngster Serge Gnabry. The German international has found his opportunities limited in the first team in recent weeks and Arsene Wenger is ready to let the player leave on loan.

Malky Mackay refuses to step down as Cardiff boss

Despite having been told by the club's owner Vincent Tan that he must quit the club or be forced out of the door by Cardiff City's chairman, Malky Mackay has refused to hand in his resignation.