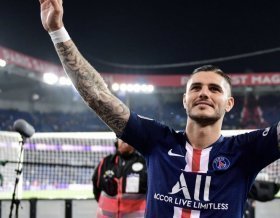 PSG Press Review: training, Champions Trophy
is blocking in particular pending a gesture on the part of the former liverpool . » And except for Mauro Icardi the other players on
29/07 11:41

Wolves have been linked with a surprise move for Argentina international and Paris St Germain forward Mauro Icardi, after identifying the 29-year-old as their top target for the summer transfer window. According to reports, the Molineux side are ready to table a 30 million euro bid to lure the striker to Wolverhampton.

Manchester United could attempt to sign Mauro Icardi, should Edinson Cavani head through the exit door this summer.

French giants Paris Saint-Germain are reportedly weighing up a move for Odion Ighalo, who is currently on a temporary deal at Manchester United.

Paris Saint-Germain are reportedly in negotiations with Arsenal as they seek to land the signature of Pierre-Emerick Aubameyang during the summer transfer window.

Edinson Cavani could reportedly snub the interest from Manchester United and Newcastle United to sign a contract extension at Paris Saint-Germain.

Serie A giants propose swap deal with Arsenal for Aubameyang

Serie A giants Inter Milan are prepared to offer Mauro Icardi in a straight-swap deal to sign Pierre-Emerick Aubameyang from Arsenal this summer.