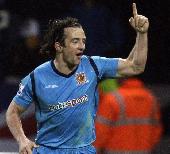 Nicky Hunt hopes Crewe Alex promotion bid won't be derailed by player sales
at promotion on the cards, Hunt admitted he hopes nobody is sold during the transfer window. He said: "To give us every chance of...
03/01 13:38

Middlesbrough look to be safe from the drop - but this is a must win game for Gary Megson's Bolton side. Boro are searching for their 100th home win while Bolton have gone 310 minutes without scoring an away goal.

Bolton Wanderers were unfortunately knocked out of the UEFA Cup on Thursday evening, as they failed to become the last Premiership side left in the UEFA Cup as Sporting Lisbon defeated the Trotters 1-0 in Portugal thanks to a goal from Man Utd target Pereirinha wrapped up the result late on.