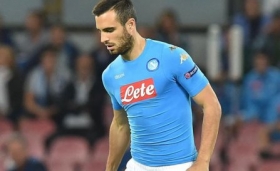 Arsenal will reportedly lodge a winter attempt to sign Napoli defender Nikola Maksimovic. The Serbia international joined the Naples outfit from Torino during the start of the previous campaign.

Chelsea have lodged a &pound35m bid to sign AC Milan centre-back Alessio Romagnoli. Blues boss Antonio Conte wants to bring in at least three players to his squad ahead of next week's transfer deadline.

Chelsea have tabled an initial offer for 6 foot 4 centre back Nikola Maksimovic, who currently plays for Serie A side Torino. The 24-year-old has been at the Italian side for over three years and is ready for a new challenge.

Chelsea have lodged a formal bid for AC Milan defender Alessio Romagnoli after they missed out on signing Kalidou Koulibaly.

Italian giants Napoli are set to battle it out with Chelsea for the services of Torino defender Nikola Maksimovic. The centre-back is desperate to leave the Turin side this summer.

West Ham United will reportedly battle it out with Chelsea for the services of Torino centre-back Nikola Maksimovic. The Serbian was reprimanded by his club after he refused to train with the first-team.