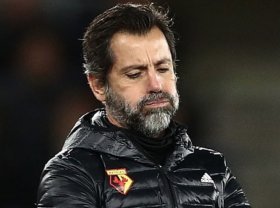 'Our efforts not good enough' - Watford bosses make joint statement
and Quique Sanchez Flores were both dismissed after they managed one Premier League win in 14 matches between them. But fortunes ...
27/07 16:41

Quique Sanchez Flores is the casualty of poor form yet again at Watford, after the Spaniard was dismissed by the Watford board of directors this weekend. Flores had been brought back to Vicarage Road but a spell of bad results meant the coach would be given his marching orders.

Watford captain Troy Deeney has emerged as a top target for Tottenham Hotspur ahead of this summer's transfer window. The 27-year-old played a key role in the club's promotion to the top tier of English football.

Now the name Paco Jemez may not be a name most Premier League fans are familiar with but he was the man who recently topped a poll in the giant Spanish Marca newspaper to be the man to succeed Vicente del Bosque as the national team manager after the European Championships in the summer.

Espanyol Barcelona striker Luis Garcia has give more than just a hint that he wold love to move across the Spanish border to Portugal and play for Quique Sanchez Flores' coached Benfica.

Benfica are set to make a massive signing this summer when they sign and seal a deal for Pablo Aimar from relegated Spanish side Real Zaragoza.

Valencia have decided to appoint Unai Emery as their new coach for next season after they reached an agreement with the highly rated 36-year old.

With so much speculation now that Frank Rijkaard will be leaving the Camp Nou in the Summer, it is being rumoured that Michael Laudrup will be the one to fill Rijkard's boots.

Ronald Koeman has sensationally been sacked by Valencia - only one week after guiding the club to Copa Del Rey glory. It is believed that Valencia have a lengthy list of replacements - including Jose Mourinho. Koeman will count himself unlucky as player relationships may have cost him his job.