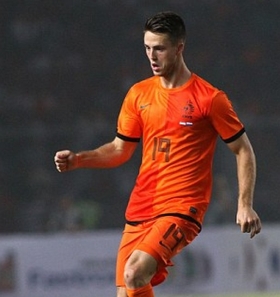 Norwich City forward Ricky Van Wolfswinkel is hoping to kickstart his career with a move to French side St Etienne on loan. The Dutch striker failed to adapt to life in England in last season's Premier League campaign.

Sweden striker Johan Elmander scored twice on his first start for his new club Norwich City, as the Canaries thrashed Bury 6-3 in their Capital One Cup encounter.

Norwich have completed the signing of Sweden forward Johan Elmander on a season long loan deal, subject to international clearance.

Former Bolton Wanderers forward Johan Elmander has revealed that he is making a return to England to play his trade with Premier League side Norwich City.

Norwich City's manager Chris Hughton has remained tight lipped on reports of a move for Italian striker Fabio Quagliarella. The Juventus striker is currently out of favour in Turin.

Norwich are amongst the teams chasing the signing of Maxi Lopez, who currently plays for Serie A side Catania. The 29-year-old forward has also attracted the interest of Sunderland in recent weeks.

Norwich have completed a deal for Dutch midfielder Leroy Fer. The 23-year-old has signed a four year contract at Carrow Road. Fer had been linked with a move to Everton in January, but he then failed a medical.

Norwich City fan favourite Grant Holt looks set to complete a move to Championship side Wigan Athletic this week. The 32-year-old has been told that he is free to leave Carrow Road.