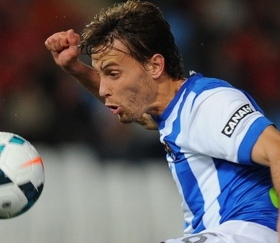 Real Sociedad’s drive to success in 2017

Despite Real Sociedad’s recent blip and defeat to Alaves 1- 0; this has been a season that has brought plenty of success for the Spanish side. What has driven the recent success of Eusebio Sacristan?

Real Sociedad's winger Sergio Canales could be set to join Aston Villa. The Villa Park outfit have been in talks with the La Liga side regarding a loan move, which was quickly rejected. Now Paul Lambert's team have made a transfer bid of 4 million euros for the player.

Premier League strugglers Fulham are keen on signing Valencia playmaker Sergio Canales on loan till the end of the season. The 22 year joined Valencia from Real Madrid permanently in 2012 having spent a season at Los Che on loan.

Fulham manager Rene Meulensteen wants to bring in Valencia midfielder Sergio Canales in on loan until the end of the season.The Spanish midfielder is no longer needed at Valencia and has been linked with a loan switch away from the Mestella.

Everton manager Roberto Martinez wants to expand his squad in time for the end of January as he looks to add Valencia midfielder Sergio Canales to his rapidly growing Toffees squad.

Tottenham may make a move for Real Madrid attacking midfielder Sergio Canales. The player is currently out of favour at the Bernabeu, and Real Madrid will let the player leave if an acceptable offer is made.

Chelsea boss Carlo Ancelotti is putting the finishing touches to a mega money offer for Racing Santander youngster Sergio Canales. It is understood that the Blues will offer £6.5 million package for the youngster.