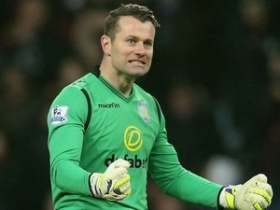 Stoke City tipped to swoop for free-agent full-back
a cool experience, as they had Bojan and Arnautovic at the time and were in the Premier League. And I scored my penalty. "I got Shay Given's
05/01 09:21

Despite yesterday’s rumours of Stoke signing Arsenal wide-man Alex Oxlade-Chamberlain, club sources have today said they are not interested in signing the Gunner.

Stoke City chairman Peter Coates has insisted that the club are working on their transfer targets for the summer despite the lack of spending in the transfer window.

Stoke City have sealed the signing of goalkeeper Shay Given from Aston Villa.

Chelsea are in pole position to sign goalkeeper Asmir Begovic with Shay Given set to replace the Bosnian international at the Britannia Stadium.

Shay Given to have Stoke City medical

Aston Villa goalkeeper Shay Given is expected to undergo a medical with Stoke today, according to reports.

Just when it seemed Shay Given would be swapping Aston Villa for Middlesbrough, Stoke City have tabled a last minute offer. Given is available on a free transfer.

Shay Given on Chelsea radar

Aston Villa goalkeeper Shay Given has emerged as a summer target for Chelsea, The Telegraph reports.

Championship outfit Middlesbrough have completed the signing of Aston Villa's veteran goalkeeper Shay Given on a one-month emergency loan.

37-year-old goalkeeper Shay Given is planning a transfer move in the January transfer window. The Ireland international is frustrated with manager Paul Lambert who has so far yet to offer the Irishman any first team action.

Liverpool are to launch a surprise move for Aston Villa goalkeeper Shay Given. The Irish shotstopper has been playing second fiddle to Brad Guzan at the Villans since last season and is ready to quit his current club in search of a new challenge.

American goalkeeper Brad Guzan has signed a new four year contract with Aston Villa. The keeper has ousted Shay Given from the first team and has now officially cemented his long term future with the Villans as he begins a brand new contract.

West Ham United will complete a signing for Real Betis' goalkeeper Adrian. The 26-year-old will join the Hammers on a two year contract and play as understudy to Jussi Jaaskelainen.

Lambert puts Villains up for sale

Aston Villa manager Paul Lambert is planning a mass clearup of his squad ranks in the January transfer window, with the likes of Shay Given, Richard Dunne and Alan Hutton all set to be allowed to leave.

Manchester United kept their title hopes within touching distance today as they swept aside Aston Villa 4-0 at Old Trafford. Goals from Wayne Rooney (2), Danny Welbeck and Nani ensured United remain 5 points ahead of Man City at the top of the Premier League.

Robbie Keane will today complete a two month loan move from LA Galaxy to Aston Villa. The Irish international striker will spend time on loan at Villa Park as a temporary forward for Alex McLeish.

Newcastle manager Alan Pardew has warned off any potential suitors for impressive Dutch goalkeeper Tim Krul, and slapped a 15m GBP on the in form shot stopper.

Villa keeper Shay Given out for a month

Aston Villa goalkeeper Shay Given will be out of action for a month, after tearing his left hamstring in the Premier League defeat to Manchester United at the weekend.

Newcastle manager Alan Pardew thinks that Dutch goalkeeper Tim Krul could be destined for big things, and could eventually be as good as former goalkeeper Shay Given.