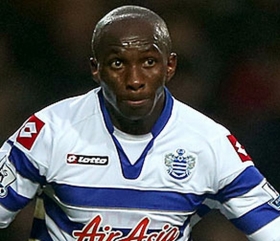 From Stephane Mbia to Taribo West - The worst players to win the Europa League
, branded a flop during his four-year stint at Everton. Valente made just 11 Premier League appearances in his final two ...
21/08 12:05

Arsenal have been reportedly linked with a summer move for Cameroon international Stephane Mbia, according to a report.

Merseyside duo to battle it out for Stephane Mbia

Everton and Liverpool are reportedly set to have a bidding war to sign Cameroon international Stephane Mbia during the summer transfer window.

Queens Park Rangers holding midfielder Stephane Mbia is reportedly open to a move to Liverpool during the summer transfer window, according to Estadio Deportivo.

Cardiff City have made an offer for defensive midfielder Stephane Mbia, who currently plays for Championship side QPR. It is understood that Malky Mackay has made an enquiry for the former Marseille man.

Midfielder Stephane Mbia has denied that he regrets joining QPR, and instead is happy to stay at the club despite an ongoing relegation battle.

Mbia still a target for Newcastle

Newcastle United are apparently still interested in signing Rennes' versatile defensive midfielder Stephane Mbia in the January transfer window. Joe Kinnear has admitted he is desperate to add new players to his squad.

Rennes midfielder Stephane Mbia has revealed that Arsenal had made a late transfer deadline day offer for him. Arsene Wenger failed to complete any transfers in time before the window closed.

Stephane Mbia is reportedly the subject of interest from several teams in the Premiership, including Liverpool. Apparently, the Cameroonian has been approached already with regard to a summer switch.

The final of the African Nations Cup is upon us, and Egypt go head to head with Cameroon. View our match preview here or view this article for team lineups.

Cameroon 3-2 Tunisia: Cameroon are through the semi-final's of the African Nations cup after a thrilling 3-2 win over Tunisia. Tunisia battled away and brought it back to level after going 2-0 down, but Cameroon starlet Mbia was the hero to send them into the semi-finals.