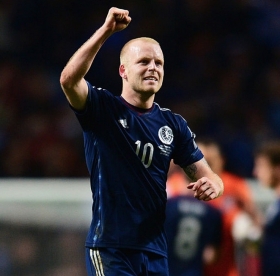 Steven Naismith on why Romelu Lukaku split opinion at Everton and 'brilliant' Roberto Martinez
on his partnership with Romelu Lukaku. The forward made the move to Goodison Park in 2012 after leaving Rangers and spent three ...
02/07 18:00

Norwich City have agreed a transfer with Everton for Scottish international striker Steven Naismith. The Carrow Road outfit have paid a reported 7.75 million GBP for the striker.

Everton manager Ross Martinez has been keepings tabs on Scotland and Fulham striker Ross McCormack. The Toffees are looking to add strength to their front line as Steven Naismith looks set to join Norwich City.

Swansea City manager Alan Curtis has admitted that the club are open to signing Everton forward Steven Naismith this month.

Everton boss Roberto Martinez has revealed that Steven Naismith will decide on his future in two weeks' time.

Everton's hat-trick hero Steven Naismith has revealed that he had considered a move to Norwich City during the recently concluded transfer window.

Cameroon international has agreed on a deal to join Sampdoria, according to a report.

Everton midfielder Steven Naismith has signed a contract extension to keep him at Goodison Park until the summer of 2019.

Of the three newly promoted teams in the English Premier League, Leicester City were by far the most impressive with a 2-2 draw at home to Everton. The Foxes showed all the battling qualities that saw them win the 2013-14 Championship by a distance over Burnley but can Nigel Pearson’s men maintain that form and avoid the drop at the end of this current campaign?

Chelsea manager Jose Mourinho has insisted that his side's wasteful finishing was the main reason for their 1-0 defeat to Everton at Goodison Park.

Scottish striker Steven Naismith has spoken of his delight at finally completing his move from Kilmarnock to Glasgow Rangers.

Steven Naismith has requested a transfer away from Kilmarnock. The striker has previously been linked with interest from Arsenal and Rangers. More recently, Hearts and Hibernian have been chasing the striker.