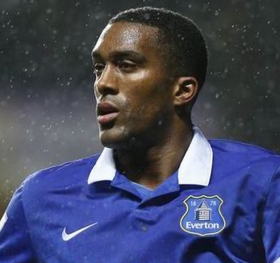 Summer transfer backed by Sylvain Distin as Blues hold talks to sign PSG captain for free
transfer to Chelsea has been backed by a former Paris Saint-Germain defender who also earned a wealth of experience in ...
23/08 19:38

Everton are understood to have lodged interest in Tottenham Hotspur defender Federico Fazio.

Everton boss Roberto Martinez has insisted that the club are not in the running to sign up Manchester United defender Jonny Evans this summer.

Manchester United look likely to offload defender Jonny Evans at the end of the season.

West Ham have contacted Everton regarding a loan move for French veteran defender Sylvain Distin. The late interest in Distin indicates that Winston Reid could be set for a move elsewhere on transfer deadline day.

Everton are reportedly monitoring the progress of Sevilla defender Federico Fazio with a view to a summer bid for his services, according to The Daily Mail.

Everton defender wants to play on

Everton defender Sylvain Distin has come out and said that he has no intention of retiring and is enjoying life under new manager Roberto Martinez.

Sylvain Distin has signed a contract extension with Premier League club Everton. The 36 year old has been one of the stars for the toffees side that are right in the midst of a fight for a UEFA Champions League.

Everton's on-loan midfielder Gareth Barry has labelled his teammate Leighton Baines as a "world class" player following his impressive brace which was crucial to the Toffees win over West Ham United on Saturday.

Italian source Corriere dello Sport are reporting that Everton have made a bid for Cagliari defender Davide Astori. The 26-year-old is one of several targets on transfer deadline day for Everton, who will soon have a large sum of money to spend on new acquisitions if the sale of Marouane Fellaini goes through this afternoon.

Everton defender Sylvain Distin has put pen to paper on a one year contract extension at Goodison Park. The French defender had been linked with a move to QPR.

Everton have been monitoring the progress of Valenciennes defender Nicolas Isimat-Mirin. The 21-year-old could be a long term replacement for Sylvain Distin, who is expected to complete his switch away from Goodison Park.

Queens Park Rangers manager Harry Redknapp is considering a move for French defender Sylvain Distin. The Everton centre back could be allowed to leave Goodison Park as manager David Moyes prepares for some changes in the January transfer window.

Everton manager David Moyes is in the market for a new centre back, after star defender Phil Jagielka sustained a knee injury. The defender will be out of action for up to six weeks.

A stunning strike from Robin van Persie marked the striker's 33rd goal of 2011, and gave Arsenal an important 1-0 victory over Everton at the Emirates. Arsenal dominated for most of the game but could not take the advantage, and RVP would again be required to seal the poitns for the Gunners.

It's fair to say that if Manchester City are going to pick up their first major piece of silverware since 1976, then they are going to need to be much more clinical next week at Wembley than they were at Goodison at the weekend. Roberto Mancini's men failed to capitalise on a host a chances against Everton, allowing the hosts to grab a somewhat surprising 2-1 victory after withstanding the City storm.