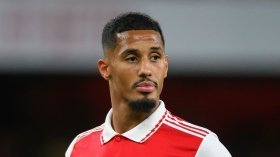 Manchester City: Colwill could become Pep’s own Saliba
... to be Pep Guardiola ‘s own version of Arsenal sensation William Saliba at the Etihad. Powered By 10 Expressions EPIC 'RANT'????ARSENAL HATE ...
25/01 18:10

Yesterday, Arsenal signed their second player of the January transfer window, bringing in Jakub Kiwior in a 20 million euro deal from Italian side Spezia. Kiwior is a Poland international, and caught the eye of the Gunners' scouts after impressive performances for both club and country.

Arsenal are confident of committing defender William Saliba to a new long-term contract, according to The Guardian.

Arsenal have activated the option of an extension to William Saliba's contract until June 2024, and talks are progressing very well with the Frenchman with regards to a new contract. The Gunners have been in insatiable form this campaign, with Saliba being an important part of the starting XI and contributing to recent success for the North London outfit.

Arsenal star duo Gabriel Martinelli and Bukayo Saka are set to return to first-team training ahead of the Premier League restart.