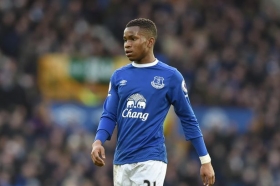 LOOK OUT Watch ex-Everton star Ademola Lookman get BOOKED for trademark glasses celebration after scoring for Atalanta
... in store as the hosts started a fightback. Fellow ex-Premier League star Gerard Deulofeu grabbed one back just two minutes after Lookman was ...
10/10 22:15

German club RB Leipzig have made a fourth bid for Everton winger Ademola Lookman, according to the Daily Mirror.

German club RB Leipzig have made a £22m offer for Everton winger Ademola Lookman, according to the Mirror.

Tottenham Hotspur and ​Southampton are prepared to rival RB Leipzig in the pursuit of Everton attacker Ademola Lookman.

Everton forward Ademola Lookman is wanted by Crystal Palace at the end of the season. Should the striker decide to leave the Toffees, he is said to be open to a move abroad, where the player is currently playing on loan for Bundesliga side RB Leipzig.

Arsenal have reportedly been put on alert with Everton forward Ademola Lookman eyeing a return to the English capital.

Anderlecht youngster Youri Tielemans has hinted that he could consider a switch to Everton while ignoring interest from top-profile Premier League clubs.

Everton have reportedly settled on a £10.4m sum to sign Standard Liege striker Ishak Belfodil. The Algerian international will undergo a medical with the Toffees ahead of signing a three-year contract.