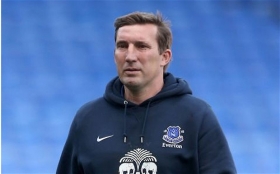 Millers set to move for Stubbs

Fresh from ending their Scottish Cup drought last weekend, Hibernian are bracing themselves for an approach from Rotherham for manager Alan Stubbs. The bookmakers have slashed the odds on the 44-year-old Englishman taking the reigns at the New York Stadium following the departure of Neil Warnock. Stubbs has recently been linked with the managerial vacancies at Blackburn and former club Bolton and Hibs now face a fight to hold on to their promising young manager.

Derby defender Alan Stubbs feels that he made the right decision in leaving Everton to join the Rams who sit rooted to the bottom of the Premiership on only nine points.

Derby have completed a notable swoop as they signed Everton defender Alan Stubbs on an 18 month deal. The central defender had been a target for Paul Jewell for some time.

Everton have completed the loan signing of Anthony Gardner from Tottenham. The player had fallen further down the pecking order at Spurs following the signing of Hutton and Woodgate.

Arsenal face a tough trip to Goodison Park if they are to regain momentum to keep in touch with Man Utd at the top of the Premiership. Everton have been outstanding this year and have a superb record against the Gunners.

As Arsenal yesterday moved four points clear on top of the Premiership, Man Utd will feel under pressure to win today against Everton; but the Toffees are no walkover this year, as their 6th place spot justifies.

Harry Redknapp's midweek madness will be a pressure on Pompey, who will be keen to keep up the start to their good season. Meanwhile, David Moyes' team are really hitting top gear being unbeaten in four Premier League matches.

Chelsea are unbeaten at Stamford Bridge in over 69 matches, and are looking for their fiftieth league win over Everton. The Toffees travel full of confidence to London though, after their 2-0 win over Nurnberg in mid-week.

Kuyt: lucky not to be sent off

Dirt Kuyt has admitted that he was lucky not to be sent off after his horror two-footed lunge on Phil Neville. Referee Mark Clattenburg sent off two Everton players, and many feel Kuyt should have been sent off. The result of the game may have been very different had Kuyt seen red, as he later went on to score the winning penalty.