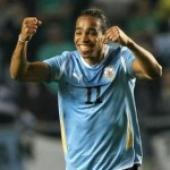 Chelsea have been warned off of making a move for Alvaro Pereira, the FC Porto defender; Blues' manager Andre-Villas Boas has reportedly been lining up a mega money 15m GBP move for the wing back.

FC Porto's Alvaro Pereira was coveted by Chelsea in the summer transfer window, but it appears that a move may be unlikely now, with the left back's agent claiming that his client has signed a new contract.

Chelsea have admitted they tried to bring Uruguayan defender Alvaro Pereira to Stamford Bridge in the summer transfer window, but failed to agree a fee with Porto for the transfer.

Alvaro Pereira admits that he was disappointed to miss out on a dream transfer from Porto to Chelsea; but will focus on his normal duties in Portugal for the time being.

Chelsea are still hoping to do business for full back Alvaro Pereira before the transfer window slams shut, and have made a final offer of 17m GBP for the defender.

Chelsea's latest offer for Alvaro Pereira has been rejected, according to reports from Portugal. The Porto defender is eager to make a move to the Premier League with Chelsea.