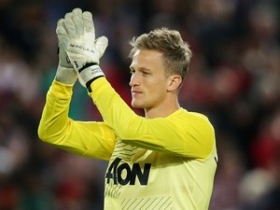 Manchester United are expected to offload goalkeeper Anders Lindegaard as he does not future in Louis van Gaal's plans for the upcoming season.

The large amounts of investment previous summer notwithstanding, the question of more players arriving at Manchester United at astronomical prices do not subside. Obviously, this comes with the task of taking players off your books. And United have a huge task at hand because as many as 10 players could be up for renewal this summer.

Manchester United's number one David De Gea is reportedly set to sign a new contract that will keep him at the club until 2018.

Spanish goalkeeper David De Gea has hit out at reports that he is no longer Manchester United's first choice keeper, with Sir Alex Ferguson instead preferring Anders Lindegaard.

According to various reports, Manchester United manager Sir Alex Ferguson is ready to ditch Spanish goalkeeper David de Gea, and hit the January transfer window in search of a replacement.

Sir Alex Ferguson has offered his full backing for Spanish goalkeeper David De Gea. The former Atletico Madrid shot stopper will be recalled to the first team due to a long term injury to Anders Lindegaard.

Polish goalkeeper Tomasz Kuszczak has slammed Manchester United, as the club continue to keep his player registration against his wishes. It is understood Kuszczak is desperate to quit Old Trafford.