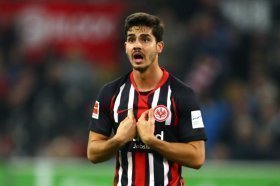 Kyle Walker sent off for "brain meltdown" tackle as Man City lose to RB Leipzig
kicked Andre Silva of RB Leipzig and was sent off. The Premier League club played against the German club in their final group stage game,
07/12 21:33

Arsenal and West Ham United have been linked with a potential January move for Real Madrid striker Luka Jovic.

Manchester United will need to pay around £35m in order to land the signature of Andre Silva this summer.

German giants to compete with Manchester United for 24-goal striker

Manchester United could sign 24-goal striker for around €40m

Manchester United could land the signature of Andre Silva for around €40m during the summer transfer window.

Manchester United could make an attempt to sign Andre Silva from Eintracht Frankfurt during the summer transfer window.

Manchester United are reportedly planning a move for Andre Silva as they aim to strengthen their strikeforce ahead of next season.

Wolverhampton Wanderers have reportedly finalised a deal worth £5m to acquire the services of midfielder Joao Moutinho from AS Monaco.

Real Madrid striker Karim Benzema has been associated with a probable exit from the Bernabeu with AC Milan leading the race for his signature.

Arsenal and Barcelona have reportedly been put on alert with AC Milan mulling over the winter sale of Andre Silva. The Portugal international joined the Rossoneri from Porto in a &pound33.6m deal in the summer.

Arsenal could reportedly lodge an approach for AC Milan forward Andre Silva. The Portugal international has been identified as a potential replacement for contract rebel Alexis Sanchez.

Premier League holders Chelsea have placed a £55m price tag on Diego Costa's head as they look to offload him to a European rival this summer, Sky Sport Italia claims.