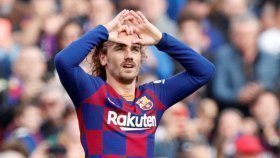 Manchester United’s decision on Antoine Griezmann transfer speaks volumes
in the summer transfer window of 2017, when Jose Mourinho ruled the Old Trafford roost. Yet Atletico were slapped with a transfer ban and
29/07 11:53

Arsenal striker Alexandre Lacazette is keen on making the move to Atletico Madrid on a free transfer.

Arsenal striker on his way to La Liga giants?

Arsenal striker Alexandre Lacazette has been identified as a potential target for Atletico Madrid, according to La Razon.

Chelsea are planning to terminate the loan contract of Saul Niguez when the transfer window reopens this winter.

Raheem Sterling on his way to Barcelona?

Manchester City attacker Raheem Sterling has been linked with a potential move to Barcelona during the January transfer window.

Barcelona have offered Manchester United and Chelsea with the chance to sign Antoine Griezmann this summer.

Manchester United believe Eduardo Camavinga has the preference to move to the Spanish La Liga this summer.

Chelsea and Liverpool set to miss out on Saul Niguez

Liverpool are reportedly among the clubs interested in signing Barcelona forward Antoine Griezmann this summer.