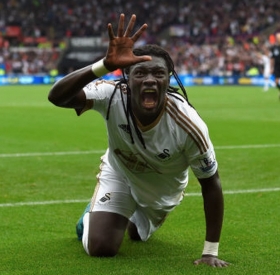 Swansea City are looking into the possibility of a swap deal that would see Emmanuel Adebayor return to the Premier League, with Bafetimbi Gomis going the opposite way to Turkey.

Swansea City have settled a transfer agreement with Sevilla for striker Fernando Llorente. The Spaniard has been tipped to leave the La Liga side after he struggled for playing time last season.

Striker Fernando Llorente is locked in talks with Swansea City over a long awaited move to the Premier League. The Spanish forward has been told he is free to leave Sevilla on loan.

Bafetimbi Gomis has left Swansea City on a loan deal to join Marseille. The striker scored 17 goals for the Welsh side and leaves with 2 years remaining on his current contract.

Leonardo Ulloa off to Swansea City?

Swansea not keen on Gomis sale

Swansea City are rumoured to have made contact with the agent of Emmanuel Adebayor. The Togo international is currently available on a free transfer; having left Tottenham Hotspur last summer.

Bafetimbi Gomis has pledged his future to the Swans, despite having been linked with a move to West Ham. The striker is now the Welsh club's first choice striker.