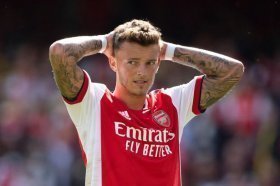 Moises Caicedo: Arsenal continue transfer talks with Brighton after £60m bid rejected
... to sixth in the Premier League. Brighton have banked big fees for their players in the past, including £50m from Arsenal for Ben White.
27/01 20:07

Arsenal travel to the Etihad Stadium for tonight's FA Cup fourth round tie against Manchester City.

Arsenal defender on the verge of joining London rivals

Arsenal defender Cedric Soares is reportedly on the cusp of joining Fulham on a short-term loan deal.

Arsenal have been handed a big blow in landing the signature of Real Valladolid defender Ivan Fresneda this month.

Chelsea are set to face direct competition from Arsenal in the pursuit of Denzel Dumfries this winter.

Arsenal defender could end up at Fulham in January