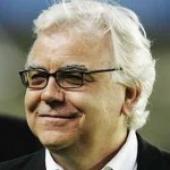 Davide Ancelotti told Bill Kenwright he was right about Everton after one game
coronavirus and Ancelotti has identified the 'special approach' during the Premier League suspension and nationwide lockdown....
04/05 11:48

Everton have ended their association with manager Ronald Koeman following the Toffees' 5-2 defeat at the hands of Arsenal on Sunday afternoon.

Everton have announced that Seamus Coleman has signed a new long-term deal which will keep him at Goodison Park until the summer of 2022.

Jamie Carragher- Lukaku could lead Everton back into Europe

Manchester United manager David Moyes could make a renewed bid for Everton defender Leighton Baines. There had been some suggestion that part of the agreement of Moyes' move from Everton to United would be that the Premier League champions are not allowed to move for players currently at the Toffees'.

Everton chairman Kenwright has no concerns over transfers

Everton's chairman Bill Kenwright admits that Marouane Fellaini is one player that could be heading for the exit door this summer. The Belgian midfielder has a release clause in his contract that allows him to leave for a team offering Champions League football.

Everton have met with Roberto Martinez and his representatives to discuss personal terms. The Wigan manager looks set to replace David Moyes after Wigan and the Toffees agreed compensation.

Roberto Martinez has held informal discussions with Everton chairman Bill Kenwright regarding a move to Goodison Park next week. The Wigan manager has been told he is free to leave the Latics.

David Moyes has told Everton that he will help the board find a replacement for him. Moyes will move to Manchester United once this season ends tomorrow. Roberto Martinez is the current favourite to move to Goodison Park.

Everton chairman Bill Kenwright is considering a move for Fulham's unhappy manager Martin Jol to replace David Moyes at Goodison Park. Moyes will step down at the end of the season and move to Manchester United.

Everton chairman Bill Kenwright has been busy preparing a list of possible replacements for David Moyes, who will move to Man Utd at the end of the season. Cardiff City manager Malky Mackay appears to be a strong candidate for the role.

New Manchester United manager David Moyes told reporters that leaving Everton at the end of the season had not crossed his mind until just a few days ago, when the Scotsman was approached to take over from Alex Ferguson.

David Moyes has no plans to quit Everton yet

David Moyes has no plans to quit the Toffees, despite rumours linking the Scotsman with a move to Premier League rivals Tottenham. Harry Redknapp is widely regarded as the favourite to step up to the vacant England manager's position, and Moyes is now being considered as a replacement for Redknapp.

Everton midfielder Marouane Fellaini has explained the reasons why he has penned a new contract at Goodison Park. The Belgium international last week put pen to paper on a five year contract. There has been suggestions that Fellaini had been looking for a more ambitious club, but Fellaini explained that Everton themselves are focusing on rebuilding for the future.

Everton chairman Bill Kenwright, who has come under immense pressure from Toffees' fans complaining about the lack of ambition at the club, has admitted there are interested buyers for the club.

Everton unlikely to invest in squad

Everton chairman Bill Kenwright has admitted that the Toffees are unlikely to spend that much money this summer, as they prepare for a difficult financial time ahead.

Everton have announced that Joseph Yobo looks set to leave the club, with Fenerbahce his next destination.