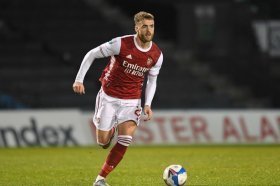 ’Newcastle were interested’: Tim Vickery says Aston Villa signing ‘Terry Butcher in reverse’
game of the 2022/23 campaign against Bournemouth. Calum Chambers is another option, he joined in January from Arsenal, and in truth, he
20/06 21:30

Dutch youth international defender Melayro Bogarde is a target for Arsenal, with the Gunners reportedly ready to pay 15 million euros to secure the 19-year-old centre-back. Arsenal are looking for reinforcements having sold Calum Chambers to Aston Villa last week.

William Saliba is determined to prove himself at Arsenal following his season-long loan with Marseille, football.london claims.

Arsenal face Liverpool on the road in the first leg of the Carabao Cup semi-final tonight.

Arsenal could sanction the sale of Pablo Mari when the transfer window reopens in the New Year.

Arsenal defender Calum Chambers has emerged as a potential target for Everton ahead of the January transfer window.

Arsenal defender offered to AS Roma?

Arsenal defender Calum Chambers has reportedly been offered to AS Roma ahead of the winter transfer window.