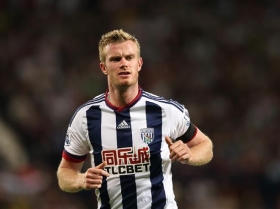 Chris Brunt released by Bristol City as injury woe threatens to end ex-Northern Ireland star's career
2018. A ruptured cruciate ligament, sustained in a Premier League game for West Brom against Crystal Palace, ruled him out of the Euro 2016
04/01 10:44

West Bromwich Albion player Chris Brunt has put pen to paper on a brand new contract at the Hawthorns. Brunt has been impressive this campaign and has been rewarded for his hard work.

West Bromwich Albion have confirmed that Chris Brunt has triggered a clause in his contract which would see him remain at the Hawthorns until 2018.

West Bromwich Albion have exercised the option in Chris Brunt and Graham Dorrans' contracts and signed the players on a new deal for a further season.

All eyes will be on Roy Hodgson as he hosts former club Liverpool at the Hawthorns for Saturday's late afternoon kick off. Kenny Dalglish still has his eyes on Premier League success this year, but needs three points today.

Paul Scharner scored in the second half to give West Brom a much needed win against Aston Villa. However, the match was full of controversey, with referee Phil Dowd giving away two penalties and a red card.

West Brom secured an emotional return to the Premiership on Monday night with a hard fought 1-1 draw over Southampton at the Hawthorns on Monday night.