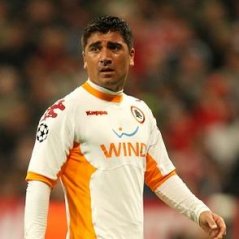 Italy and Roma midfielder Daniele De Rossi has today put pen to paper on a fresh contract at his club, but admitted that he very nearly quit the club this month, apparently for a move to Manchester City.

Manchester City will tonight complete a loan move for Chilean midfielder David Pizarro. The 32 year old will move to the Premier League from Roma until the end of the season.

Roma boss Luciano Spaletti has apologised for comments Roma midfielder David Pizarro and club director Bruno Conti made about Cristiano Ronaldo; the player they both accused of showboating in the first leg in the Champions League First Leg in Rome.

Roma earned a last minute victory over Genoa thanks to another last-minute header from on fire defender Christian Panucci. Elsewhere, Inter defeated Atalanta 2-1 to stay on top - just ahead of Roma.

AS Roma battled to a tough 2-1 victory over Sporting Lisbon at the Stadio Olympico to put themselves in pole position to snatch the second knock-out phase qualification place behind group leaders Man Utd.